I went to see the exposition ‘Quentin Blake’s friends’ at the Meermanno Museum in the Hague. It was a delight to see the collection of his illustrations and sketches for Matilda, the BFG and many other works. But most interesting to see were his more ‘serious’ works as I had only ever seen his children book’s illustrations. Look at this one, an illustration for the book ‘The Golden Ass’ by Apuleius: 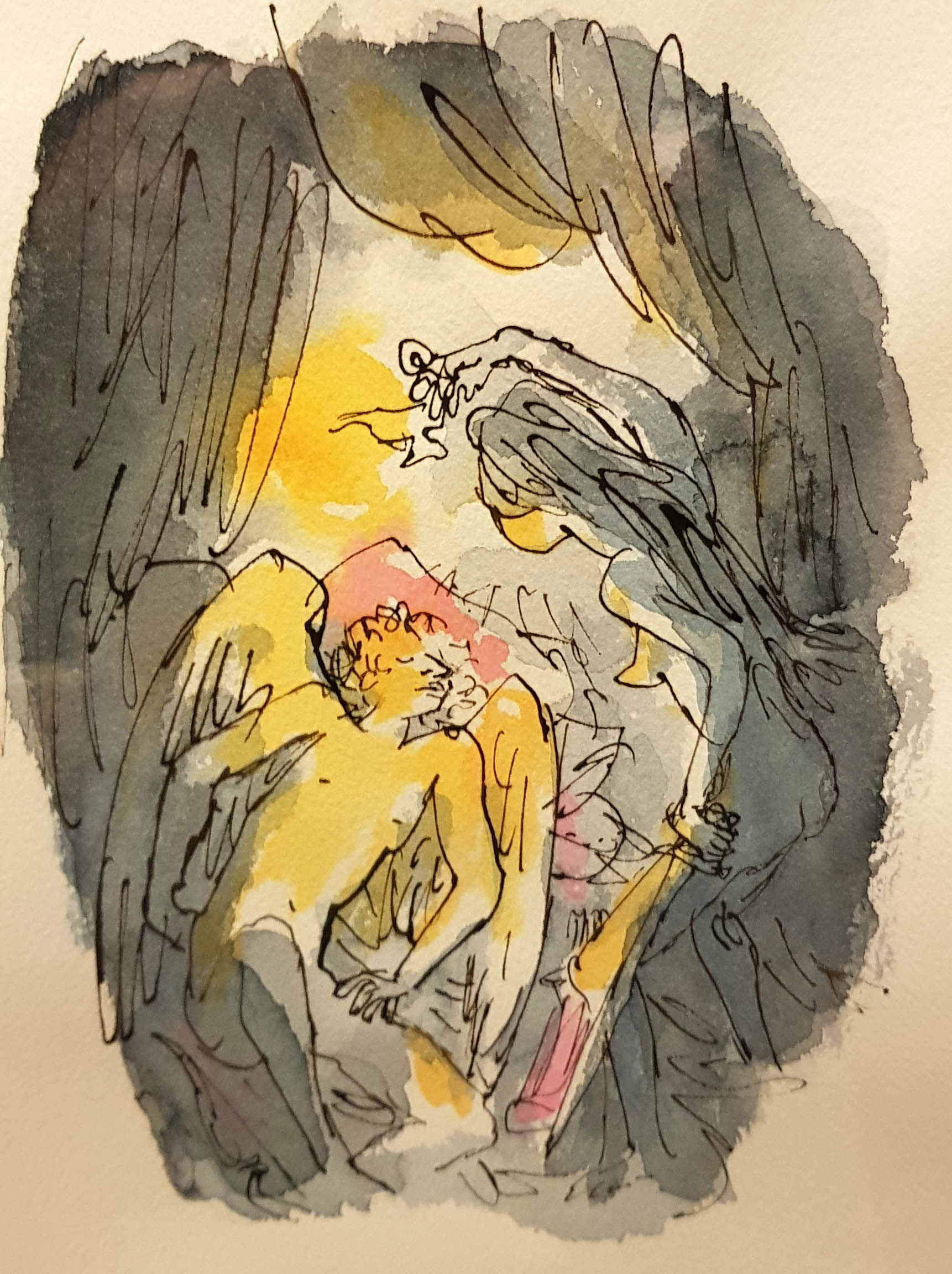 In the story by Apuleius, Psyche is wedded to Cupid. She is very happy but is not allowed to see him, because he wants her to love him as an equal and not as a god. But she is persuaded by rumours and her jealous sisters that her husband might be a hideous monster and that she should look upon him secretly in the night; and slay him if needed. When, in the middle of the night, she shines her lamp on him, she sees that he is beautiful and not a monster at all; but he wakes when a hot drop of lampoil falls upon his shoulder and banishes her from his side because ‘love cannot dwell with suspicion’ (Apuleius, 2nd century AD)

I remember that as a child, I was very fascinated by a book of old Greek myths. Accompanying the story of Daedalus and Icarus was a drawing of Icarus falling from the sky towards his death. It was a very dramatic and realistic drawing; his wings were disintegrating about him, because despite his father’s warnings, he had flown too close to the sun. it was very scary and awe inspiring.

What I find so beautiful about the illustration by Quentin Blake, is that it has nothing of this Greek Myth Pathos that you expect. On the contrary, it is very human and vulnerable. The drapes around the small, enclosed space of their bed and the lamp light illuminating their nudity emphasize the intimacy of their love.

There is no hesitation in the sketchy lines that capture the essence of their gestures; as always, Blake combines the seriousness of the moment with a beauty and playfulness that renders the characters innocent. This contrasts with the sense of tragedy beautifully. It made me hope for Psyche’s salvation all the more, and luckily in the end, they are reunited.

There were also three drawings from the exhibition ‘The only way to travel’, the only Quentin Blake exhibition so far that is not a collection of existing work. Quentin Blake chose the theme and made all the work for it within a period of six months. In the Hague I saw these three:

‘These artworks were developed from work I made for an exhibition called The Only Way to Travel. The ways I proposed were mostly fantasy, which, perhaps strangely, allowed me to touch on themes such as dislocation, depression and seeking refuge.’ (Blake, 2018)

These images blew me away. They are so strange and right. The characters are alone, maybe lonely. They are accompanied by strange creatures and contraptions, and seem to be determined, even obstinate, but unique in their strangeness; on their way to somewhere or nowhere. Here are some details:

If you can capture the essence of your characters with so little concern for correctness, so much faith in your materials and such friendly, playful, serious, and loving abandon to where your hands lead you, I think you have reached the height of your artistry.